With Elections Ahead, Some African Presidents Try Engineering Results

DAKAR, Senegal — The president of the West African nation of Guinea is running for a third term on Oct. 18, even though Guinea requires its presidents to step down after two. But because of a constitutional change he initiated, his first two terms don’t count.

The president in neighboring Ivory Coast has made his first two terms disappear with a constitutional amendment, too. So he is also running for a third-but-actually-first term, on Oct. 31.

And after 34 years in power, Uganda’s 76-year-old president plans to run for re-election in February. The age limit for presidents in Uganda was 75, but then he changed the constitution, and sought to prove his fitness to stay in office with a demonstration of his red-carpet workout routine in the State House — to the howls of many Ugandans.

While much of the world may be focused on the contest for the top job in the United States, presidential elections are also set to take place in at least 10 of Africa’s 54 countries over the next five months. All of the incumbents but one want to stay in office.

While most African presidents since 1990 have stepped down after their terms were up, many are now bending the rules to ensure they stay in power. Some have manipulated supreme courts and electoral commissions; others have changed constitutions, prosecuted opposition candidates or prevented them from running by imposing onerous qualifying criteria.

But countries like the United States that once claimed to stand against those undermining democracy are now turning inward and so, some political thinkers say, incumbents are increasingly getting away with it.

“Too many of our countries have not stood by the protocols and the resolutions that we have made in our regional institutions. Regarding democracy. Regarding term limits. Regarding the transfer of power in a regular and peaceful way,” said Ellen Johnson Sirleaf, the former president of Liberia. “And those shifts are coming also because of the changes in the geopolitical landscape.” 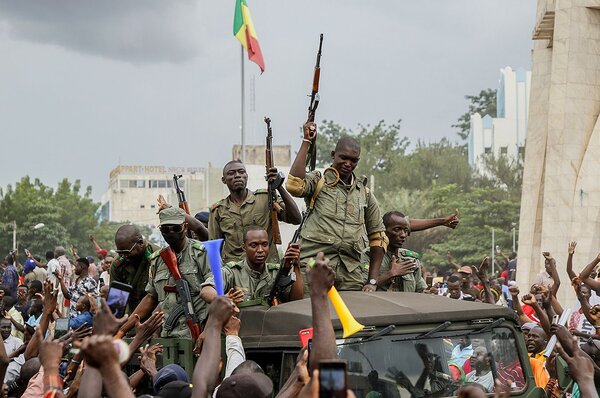 European colonizers frequently damaged or destroyed Africa’s own systems and traditions of holding power to account, as historians have chronicled. Post-colonial African governments have instead relied on imported, sometimes ill-fitting political systems. And at around 60 years old, these systems are still younger than many current presidents.

In March, Ivory Coast’s President Alassane Ouattara, 78, was basking in praise for saying he would step down when he had completed his two terms — despite arguing that he didn’t have to, because a constitutional change meant his term clock was reset to zero.

But four months later his chosen successor suddenly died, and the president judged that no other candidate would do. Like his predecessors, Félix Houphouët-Boigny, Ivory Coast’s first president, under whom Mr. Ouattara served as prime minister, and Laurent Gbagbo, whose refusal to leave office in 2011 triggered the country’s second bloody civil war within a decade, Mr. Ouattara decided to hang on — calling it a “real sacrifice.”

Protests spread across the country. Then two of the front-runners were barred from standing in the election — Mr. Gbagbo, who last year was acquitted of crimes against humanity at the International Criminal Court, and Guillaume Soro, a former prime minister and rebel leader living in exile, who was sentenced to 20 years in jail in absentia in April.

Four candidates remain, though 40 were disqualified.

“Not allowing the others to be candidates will surely bring another war,” said Mélodie Gnékonté, a secretary who said her uncle, an army doctor, had been killed during the last war.

Ivory Coast’s economic growth is second only to Ethiopia’s in Africa, but Ms. Gnékonté said President Ouattara was “spoiling” everything he had achieved by “finding reasons to stay in power.”

The coups of the 1970s and 1980s are now mostly a thing of the past. Since 2015, there have been at least 30 peaceful transitions of power in sub-Saharan African countries, including in Liberia, Sierra Leone, Ghana and Nigeria, where ruling parties lost elections.

Rigging outcomes on Election Day, by stuffing ballot boxes or changing vote tallies, has become more difficult in recent years, said Mathias Hounkpe, a specialist in political governance at the Open Society Initiative West Africa. Politicians are changing their tactics as a result, he said.

“Little by little, those in power are realizing that it’s becoming harder to cheat,” Mr. Hounkpe said in an online debate. “They use the means they have to keep the political space in check.”

Across French-speaking West Africa, civic space is shrinking, so that citizens trying to hold their governments to account face repressive laws, arrest and sometimes death, according to a report to be published by the global nonprofit Civicus.

His success at maneuvering to stay in power is partly the fault of Western negligence, said Cellou Dalein Diallo, the Guinean opposition leader.

“The Europeans are less attentive, and the Americans, with the arrival of Trump, are less demanding when it comes to democracy and human rights,” Mr. Diallo said on a recent campaign trip to Dakar, Senegal, where a large Guinean diaspora lives.

U.S. Secretary of State Michael Pompeo issued a two-paragraph statement last week about “upcoming elections in Africa,” warning that “repression and intimidation have no place in democracies.” But many Africans commented on social media that such a skimpy, blanket statement about the continent, rather than specific countries, was evidence that there is little interest from the administration of President Trump, who denigrated African countries with a memorable epithet in 2018.

As a result, many Guineans living abroad may be unable to return to cast their votes. And some of those at home, who can vote, say politicians are trying to sow division.

“Power shouldn’t be something they cling to, knowing that there are people who could do better,” said Fanta Traoré, a student at the French University of Guinea.

In Uganda, political rallies are banned because of the coronavirus, making it harder for opposition candidates. To reach voters, candidates have to rely on the news media, over which President Yoweri Museveni and the ruling party exert great influence.

Tanzania’s political space is shrinking rapidly too. The opposition leader Tundu Lissu, who spent three years in exile after an assassination attempt, has returned to the country to run for president, but says police are disrupting his campaign. He says he fears for his life.

Until recently, Gambia was riding on the joyful high that followed the dislodging of its longtime autocratic president in 2016. But the new president reneged on his promise to serve for only three years. Last month, his supporters in the National Assembly rejected a new, transformative constitution because, civil rights activists say, it would limit the new president to a decade in power.

The other countries set to have elections in the next five months are Benin, Burkina Faso, the Central African Republic, Ghana and Seychelles. The only country where the incumbent is not running is Niger.

Like constitutions, coups — while now rare — are evolving too. When soldiers abducted Mali’s democratically elected president, Ibrahim Boubacar Keïta, on Aug. 18, and forced him to resign on state television, they denied that this constituted a coup. They presented it as the will of the people and peppered their speeches with pro-democracy language that seemed designed to be palatable to Mali’s Western partners, the African Union and the Economic Community of West African States.

On a video conference two days later, 14 West African presidents discussed the coup. Putschism was a grave disease, Niger’s president said. Others appeared worried their countries might catch it. If Mali’s coup leaders got away with this, would it inspire Ivory Coast’s or Guinea’s citizens to rise against their own tenacious presidents?

But it was the presidents’ newest colleague who gave voice to what many West Africans citizens have expressed.

All coups d’état should be condemned, said Umaro Sissoco Embaló, the president of Guinea-Bissau. Third terms, he said, also count as coups.