Police confirmed last night that a major operation was under way in the wake of the shooting near one of the Austrian capital’s main city squares and seven of the casualties were seriously injured. Officers said there had been six flashpoints including a shooting in a hotel along with reports of people being held hostage in a Japanese restaurant. Interior minister Karl Nehammer told Austrian broadcaster ORF: “At the moment I can confirm we believe this is an apparent terror attack.”

The police tweeted: “Shots fired in the Inner City district – there are persons injured – keep away from all public places or public transport.

“There are several injured persons.We are on site with all available forces. Please avoid all public squares in the city.”

One suspect has been arrested following the shooting it was reported by Austrian media.

Several people are understood to have masterminded the attack but there were conflicting reports that a sole attacker was behind the shooting.

A number of shots were fired near the synagogue just after 8pm near the banks of the River Danube on the eve of a lockdown due to the pandemic. 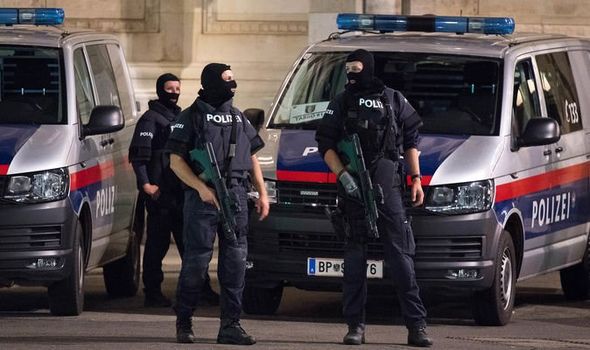 The head of Austria’s Jewish community said on Twitter that it was not clear whether the synagogue or adjoining offices were targets of the shooting as they were closed at the time of the initial attack.

Vienna Police used Twitter to confirm there is a “large police operation” going on in the area, and there are “persons injured”.

In a series of tweets, Polizei Wien said: “Several shots fired in the central district of Vienna – there are injured people – Do not stay in public areas! Stay home!”

Last night French President Emmanuel Macron said: “We, French, share the shock and sadness of the Austrians after an attack in Vienna. After France, it is a friendly country that is under attack.

“This is our Europe. Our enemies need to know who they are dealing with. We won’t give in to anything.”