Iran celebrates Donald Trump’s defeat in US Presidential election – ‘The coward has left!’ 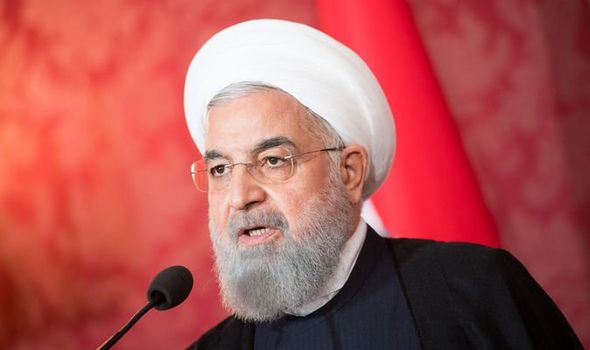 Tensions between the US and Iran have reached boiling point after the outgoing President Donald Trump pulled out of the Tehran nuclear deal. But Iranians have celebrated Mr Trump’s election defeat.

Under the Trump administration Washington was seeking an extension of a United Nations (UN) arms embargo against Tehran.

However, Mr Trump abandoned the agreement in 2018 and has gone on to introduce a number of sanctions on Iranian oil exports.

These sanctions have crippled the economy.

But hopes for new negotiations between Tehran and the Biden administration could resolve rows between the two nations.

Back in January this year, the two countries were on the brink of war after US forces killed Iranian major general Qassem Soleimani during a missile strike in Iraq.

General Soleimani was travelling through Baghdad when his convoy was struck by three US missiles.

Just days after the attack, Tehran retaliated and launched a series of ballistic missiles at two Iraqi bases housing US troops.

He told the Institute for International Political Studies: “I believe the greatest sadness of my career is that I haven’t been able to get through to our neighbours that we need to live together, that we cannot live without each other, that we will be neighbours forever and we have to find a way to live together and not rely on outsiders for our security.”

Back in July, a spokesperson for the Pentagon claimed Iran was the “greatest threat” to world peace after armed “underground cities” were exposed.

They told Newsweek: “Iran claims to want good relations with its neighbours, yet it continues to threaten them with even greater levels of violence.

“Iran is the greatest threat to peace and security in the Middle East.

“Statements like this demonstrate clearly that the Islamic Revolutionary Guard Corps and its leaders are a destabilising force in the region.”

Kaleigh Thomas, Research Associate for the Middle East Security Program, told Express.co.uk the Iranians are looking to come back to the negotiating table from a “position of strength”.

She said before Mr Biden’s win: “I think we are seeing a game of brinkmanship to an extent, less so trying to push the other to misstep into a larger conflict, but trying to force the other to make concessions.

“Currently, the Trump administration has maintained and, as much as you can increase maximum pressure, has continued to put pressure on Iran and to bring them to the negotiation table where Iran is in the weaker position.

“Iran similarly has increased its aggression in the region as it wants to build leverage in any future negotiations.

“And I think whether or not you have a second term Trump presidency or a new administration with Biden, the Iranians are looking to make sure that when they do go back to the negotiation table, they are coming to that table from a position of strength.

“And the way they achieve that is through this regional aggression which puts pressure on the US to reduce tensions, hopefully diplomatically.”