Barr presses for federal arrests of some George Floyd protesters

The Trump administration has already arrested more than 300 protesters since the death of George Floyd. 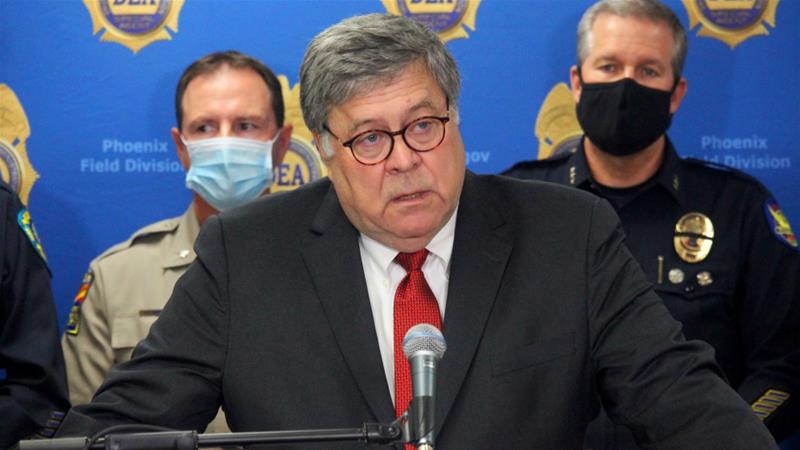 In a private call with federal prosecutors across the country, Attorney General William Barr’s message was clear: Aggressively go after demonstrators who cause violence.

Barr pushed his US attorneys to bring federal charges whenever they could, keeping a grip on cases even if a defendant could be tried instead in state court, according to officials with knowledge of last week’s call who were not authorised to publicly discuss the matter and spoke on condition of anonymity. Federal convictions often result in longer prison sentences.

The Trump administration’s crackdown has already led to more than 300 arrests on federal crimes in the protests since the death of George Floyd. An AP analysis of the data shows that while many people are accused of violent crimes such as arson for hurling Molotov cocktails and burning police cars and assault for injuring law enforcement, others are not. That has led to criticism that at least some arrests are a politically motivated effort to stymie demonstrations. 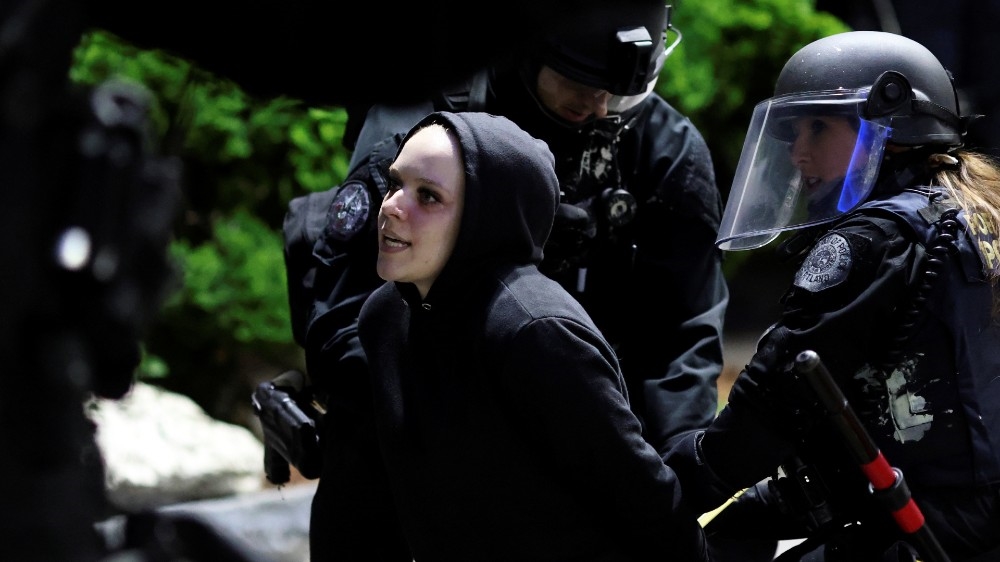 “The speed at which this whole thing was moved from state court to federal court is stunning and unbelievable,” said Charles Sunwabe, who represents an Erie, Pennsylvania, man accused of lighting a fire at a coffee shop after a May 30 protest. “It’s an attempt to intimidate these demonstrators and to silence them,” he said.

Some cases are viewed as trumped up and should not be in federal court, lawyers say, including a teenager accused of civil disorder for claiming online “we are not each other’s enemy, only enemy is 12”, a reference to law enforcement.

The administration has seized on the demonstrations and an aggressive federal response to showcase what President Donald Trump says is his law-and-order prowess, claiming he is countering rising crime in cities run by Democrats. Trump has derided protesters and played up the violence around protests, though the majority of them are peaceful.

Pockets of violence have indeed popped up in cities, including Portland, Oregon, where protests devolved into clashes with law enforcement for weeks on end. Nights of looting and other unrest have occurred elsewhere: Rochester, New York; Minneapolis, Louisville, Washington, DC, and Chicago.

Federal officials were called to Kenosha, Wisconsin, after large protests and unrest following the shooting of Jacob Blake and the gunning down of two protesters and the later arrest of a 17-year-old in their deaths. Notably, that teenager has not been charged with any federal crimes. Neither was a man accused of shooting and killing a demonstrator in Louisville following the death of Breonna Taylor.

While Barr has gone after protest-related violence targeted at law enforcement, he has argued there is seldom a reason to open sweeping investigations into the practices of police departments. The Justice Department, however, has initiated a number of civil rights investigations into individual cases. Barr has said he does not believe there is systemic racism in police departments, even though Black people are disproportionately more likely to be killed by police, and public attitudes over police reforms have shifted. 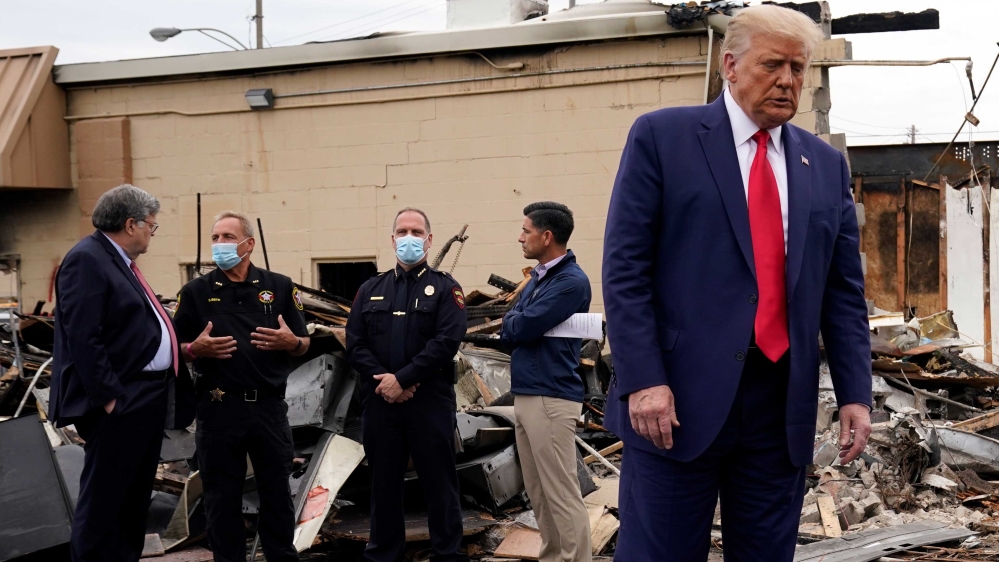 During the call with US attorneys, Barr raised the prospect that prosecutors could bring a number of other potential charges in unrest cases, including the rarely used sedition statute, according to the officials familiar with the call. Legal experts cautioned the use of that statute is unlikely, given its difficulty to prove in court.

Federal involvement in local cases is nothing new. Officials across the country have turned to the Justice Department for decades, particularly for violent crime and gang cases where offenders could face much stiffer federal penalties and there is no parole.

Police chiefs in several cities have pointed to the importance of their relationships with federal prosecutors to bring charges that can result in long prison sentences to drive down violent crime.

Even before the unrest earlier this year, the Justice Department was stepping in to bring charges in states where the government believes justice is not being fully pursued by local prosecutors. In January, for example, the department brought federal hate crime charges against a woman accused of slapping three Orthodox Jewish women in one of several apparently anti-Semitic attacks reported throughout New York during Hanukkah.

It is not clear whether protest-related arrests will continue apace. Demonstrations have slowed, though not necessarily because of the federal charges. Wildfires in the West and hurricanes in the South have lessened some of the conflict.

While many local prosecutors have dismissed dozens of low-level protest arrests, some are still coming down hard. A Pennsylvania judge set bail at $1m for about a dozen people in a protest that followed the death of a knife-wielding man by police.

Even some Democrats, including District of Columbia Mayor Muriel Bowser, have called for the Justice Department to pursue federal charges against violent demonstrators, going as far as accusing the administration of declining to prosecute rioters. Washington’s Metropolitan Police Department had arrested 42 people one August weekend after a protest left a trail of vandalism. But prosecutors said the arrest paperwork did not identify specific crimes tied to each suspect.

The federal confrontation with Bowser seemed counterintuitive, though Trump has a history of squaring off against the mayor.

About one-third of the federal protest-related cases are in Portland, for crimes such as assaulting a deputy US marshal with a baseball bat, setting fires and setting off explosives at the federal court and throwing rocks at officers.

Three purported “Boogaloo” members, who use the loose movement’s name as a slang term for a second civil war or collapse of civilization, were charged with possessing a homemade bomb and inciting a riot in Las Vegas. 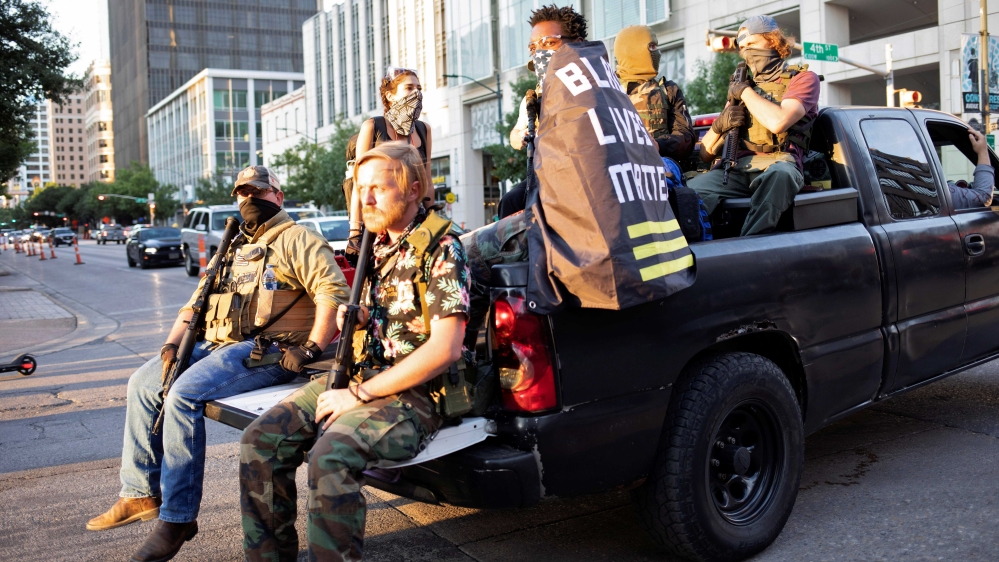 An El Paso, Texas, man was accused of promoting hate speech, posting a video online with a racist epithet and making threatening comments to Black Lives Matter protesters while holding a military-style rifle at his feet. A Minnesota man was accused of helping burn down a police precinct headquarters there after Floyd’s death.

But other cases simply do not belong in federal court, lawyers say.

In Seattle, 35-year-old Isaiah Willoughby, who is accused of setting fire to the outside of a police precinct, faces a mandatory minimum of five years in prison if convicted of arson in federal court. He could be looking at about a year behind bars in state court, where his lawyer said the case belongs.

“This is city property that has been destroyed and you have a local prosecutors office that is ready and willing and able to charge these cases in state court, but the federal government is attempting to emphasize these protest-related crimes for whatever agenda they are seeking to pursue,” said assistant federal public defender Dennis Carroll.

Carroll accused federal authorities of using the cases to try to make the protests seem more violent and disruptive than they really were.

Federal prosecutors this month agreed to dismiss the charge against a man who authorities said was found with a Molotov cocktail in his backpack after he and other protesters were arrested in May for blocking traffic in Jacksonville, Florida. Video showed that 27-year-old Ivan Zecher was wrongfully arrested because he was actually on the sidewalk – not in the street – meaning prosecutors could not pursue their case, Zecher’s attorney, Marcus Barnett said.

“There is absolutely an agenda here to blow these out of proportion, make these look more serious or more sinister than it is,” Barnett said of the pursuit of federal charges. “This is the Justice Department, from the top, furthering an agenda that has nothing to do with justice.”

Victoria erupts as lockdown continues despite virus average dropping below 5