Foreign minister Simon Coveney suggested the negotiating mandate handed to Michel Barnier by EU member states is incompatible with promises made the UK’s fishing fleet. He suggested Boris Johnson’s pledge to take back control of Britain’s coastal waters has left the Brexit trade talks in trouble. The wrangling over the EU-UK future relationship treaty continues today in Brussels between Lord Frost, the Prime Minister’s Brexit envoy, and Mr Barnier, the EU’s chief negotiator.

In a downbeat assessment, Mr Coveney said: “The negotiations are not in a good place when it comes to fishing.

“There hasn’t been any success in closing the gap between the positions of either side.

“Until we find a way of doing that, there isn’t going to be an agreement. We’re in the same place in fishing as we were in mid-summer and neither side has really budged from their position.”

Brussels has been adamant there will be no wider trade deal without an agreement that grants long-term access for EU vessels to Britain’s coastal waters. 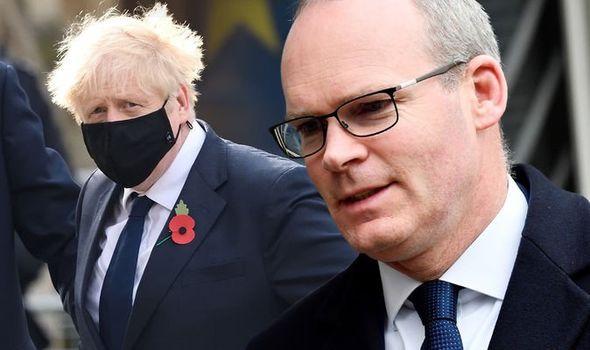 With just 40 days until the end of the post-Brexit transition period, negotiations have entered into a crunch phase as both sides hold out for concessions.

Mr Coveney signalled the EU would have to switch its focus to its plans for a no-deal Brexit if a breakthrough isn’t made in the next 10 days.

In an attack on Downing Street’s tactics, Mr Coveney accused British negotiators of rowing back on promises made as part of the Brexit divorce deal.

He also questioned No10’s “political appetite” for striking a deal with Brussels in the coming days.

Mr Coveney said: “I think the British Government understand only too well what’s required for a deal this week, the real question is whether the political appetite is there to do it. I think we will get a deal, that’s been my prediction for a while but I won’t be shocked if it all falls apart.”

He added: “Britain’s red lines have changed. Let’s be clear what’s changed in the negotiations over the last 12 months.

“We had a written agreement that there needed an agreement on a level playing field and the detail on that. The British Government has moved away from that approach.

“We also had an agreement that fishing would have to be resolved at the same time as an overall trade agreement was agreed, and there has been attempts by the UK to separate fishing out from the other negotiations.