The Health Secretary was confronted by Jonathan Ashworth after the Labour frontbencher tabled an urgent question in the Commons on the coronavirus testing shortages. Mr Ashworth claimed Matt Hancock and his team had failed to deliver on the promised “world-beating” testing system and that instead of a “whack-a-mole” testing effort, the Government’s “mullet is broken”.

Labour’s shadow health secretary asked why the Government did not foresee a rise in infections.

“So extra demand on the system was inevitable, so why didn’t he use the summer to significantly expand NHS lab capacity and fix contact tracing?”

But the Labour MP was promptly shamed by Mr Hancock who proved the House the UK’s testing capacity is at record highs as he revealed yesterday’s whopping figures.

He said: “The good news in responding to that is that capacity for testing is at a record high and he raised the issue about testing in the top 10 local authorities. 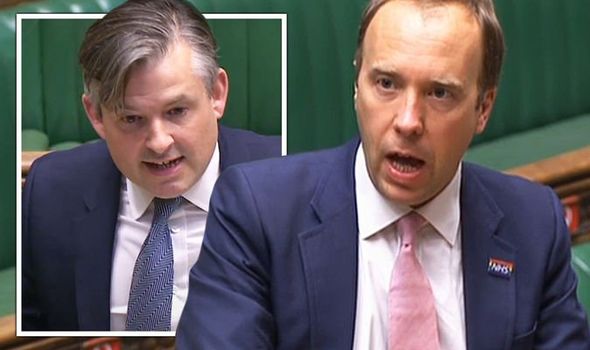 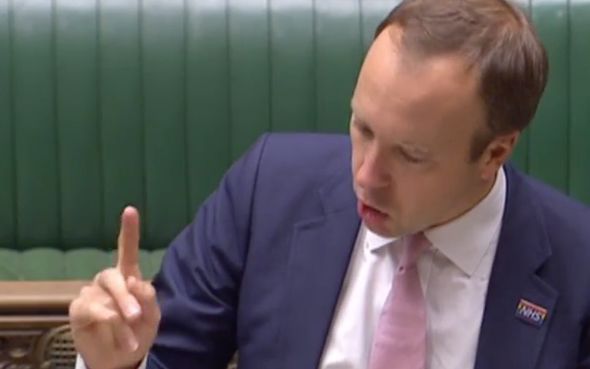 “We processed yesterday 9,278 tests just in the pillar two so outside the NHS testing capacity in just those top 10 local authority areas.

“Just yesterday, we processed 1,428 tests in his own local authority area.

“So the good news is that capacity is at record levels and that record numbers of people are able to get tests.

“I don’t deny that it is an enormous challenge and when you have a free service it’s inevitable that demand rises.

“The challenge is to make sure that we priorities the tests that we have as a nation to those who most need them.”

He added: “He asks about the backlog, that’s now falling and is less than one day’s test processing capacity.

“And he also asked about being able to have testing capacity so that we can re-enable the economy and we can get things going.

“As he well knows there is a huge effort to expand using the next generation technologies the tests that we need to reopen parts of the economy.

The Health Secretary told MPs that the average distance travelled to a test site is now 5.8 miles.

He told the Commons: “Everyone in this House knows that we’re doing more testing per head of population than almost any other major nation and I can update the House that we have now carried out over 20 million tests for coronavirus in this country.

“As we expand capacity further, we’re working around the clock to make sure everyone who needs a test can get a test.

“The vast majority of people who use our testing service get a test that is close to home and the average distance travelled to a test site is now just 5.8 miles, down from 6.4 miles last week.”

Matt Hancock added that there are “operational challenges” with testing which the Government is “working hard” to fix.

He said: “We’ve seen a sharp rise in people coming forward for a test, including those who are not eligible.

“And throughout this pandemic we have prioritised testing according to need.”

Mr Hancock added: “I do not shirk from decisions about prioritisation. They’re not always comfortable, but they are important.

“The top priority is and always has been acute clinical care. The next priority is social care, where we’re now sending over 100,000 tests a day because we’ve all seen the risks this virus poses in care homes.

“We’ll set out in full an updated prioritisation and I do not rule out further steps to make sure our tests are used according to those priorities.”