‘People of colour seem to be superglued to the floor’

The UK’s top firms have failed to make any progress on increasing ethnic diversity amongst top executives, a new report has found.

Ethnic minority representation has fallen over the past year and 47 companies still have all-white staff at board and executive director level.

[Yet] people of colour seem to be superglued to the floor.”

There are only 10 black, Asian and minority ethnic (BAME) people working in leadership roles across companies in the FTSE 100, the annual Leadership 10,000 report from recruitment consultancy Green Park shows.

Green Park said that at 3.3% the proportion of BAME executives showed no improvement over the six years since they began monitoring ethnic diversity at the top three leadership tiers of companies, namely senior executives, board members and executive directors. 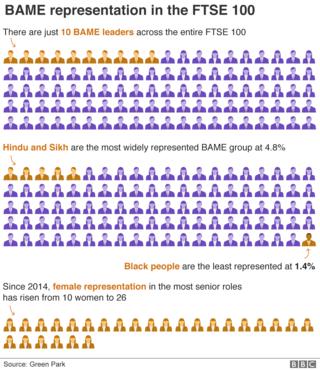 “Most business leaders would like to do more, but they have an idea about what a top executive looks like and they’ve sort of got to the place where they can envisage a woman being that person, but I think it’s not in their minds at the moment that a person of colour could be that,” Mr Phillips, chairman of Green Park and founding chairman of the Equality and Human Rights Commission told the BBC.

Since 2014, female representation at the top three leadership tiers has risen from 10 women to 26.