Even as businesses around the world shut down this spring, executives at EDF Renewables were hopeful they would finish installing 99 wind turbines in southern Nebraska before a year-end deadline. Then, in early April, the pandemic dealt a big blow to the company.

A manager at a factory that was building the giant cylinders on which the turbines sit had died of the coronavirus, shutting down the plant and delaying EDF’s work by five weeks. That and other setbacks — including construction workers at the site in Nebraska contracting the virus — have hampered EDF’s efforts to finish the $374 million project by the end of the year. A prolonged delay could increase costs, threatening the project’s financial viability.

The company’s struggles are emblematic of how the pandemic has disrupted global supply chains and imperiled tens of billions of dollars of investments and millions of jobs, with retail stores and oil and gas companies among those hit hardest. But EDF’s challenges show how the pandemic has walloped even thriving industries like renewable energy.

The American Wind Energy Association estimates that the pandemic could threaten a total of $35 billion in investment and about 35,000 jobs this year. The losses could grow if the coronavirus continues to disrupt the economy well into next year.

“Every part of the supply chain has been hit by this,” said John Hensley, the wind association’s vice president of research and analytics. “Certainly if we see major delays, it can take a major economic toll.”

Wind turbines provide more than 7 percent of U.S. electricity and are the largest carbon-free energy source after nuclear power plants. Nebraska gets about 20 percent of its electricity from wind, and when it is complete, EDF’s project will have the capacity to meet the electricity needs of about 115,000 homes.

The wind energy business was growing about 10 percent a year before the pandemic. But industry officials now fear that projects under construction might be postponed or canceled because of the pandemic. The industry had hoped Congress might provide aid to renewable energy, but it got little from the stimulus bills passed in the spring.

The industry did receive some help from the Treasury Department, which in May gave wind energy developers more time to complete construction in order to qualify for a federal tax credit. Businesses now have to finish projects they began in 2016 and 2017 within five years, up from four years previously. EDF began its project in 2016.

“Everybody is trying to figure out how everything is going to land,” said Benoit Rigal, a vice president of engineering and construction for EDF.

A virus scare in a small Nebraska town 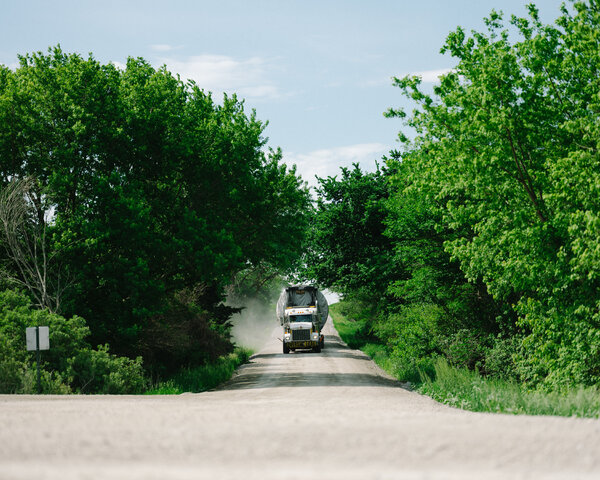 On March 13, EDF was preparing the site to receive three dozen blades that harness the wind. These are some of the first components the company had expected to arrive in the village of Milligan, Neb., less than an hour southwest of Lincoln.

But three days before the blades were scheduled to arrived, Dwynne Igau, an EDF planning and construction manager in charge of the project, received worrying news: one of her workers had taken ill. Ms. Igau quickly called off the delivery and ordered about 30 percent of her crew into quarantine.

The areas around Milligan experienced an early surge in coronavirus cases, driven in part by infections at meatpacking plants. Just a few hundred people live in the village, a railroad community incorporated in 1888 that is surrounded by rows of cornfields and is known as the “Hospitality Capital of Nebraska” because it has services like a salon and spa.

According to EDF, at least three workers tested positive for the virus this year. Several people who worked as contractors and equipment suppliers have also gotten sick.

“We didn’t really think it would spread that much and that fast,” said Gilles Gaudreault, transport and logistics manager who also oversees the project.

Normally, Ms. Igau would have been at the construction site to manage the work. But the pandemic had forced her to work from her home, in a suburb of Austin, Texas, more than 800 miles away. Ms. Igau also had to deal with an outbreak closer to home: Her daughter’s college roommate came down with the coronavirus, forcing the family to shuttle her daughter back and forth multiple times from Texas A&M University, about two hours away.

Ms. Igau had spent seven years leading project operations but had never encountered anything like this. It was the first time she lost access to her crew for days on end.

“There was so much uncertainty in the March, April time frame about what our deliveries would look like,” Ms. Igau said. “Would we have components in that time frame to start putting these components together?”

The blades that were delayed in mid-March were on their way from China and sat for days at a railway yard in central Nebraska. But that delay was hardly the last of Ms. Igau’s problems.

Another set of blades, from India, were delayed when the government there closed a factory because of a coronavirus outbreak. The plant eventually reopened, but the shutdown had a lasting impact, and the last seven of those blades just arrived at a Houston port last week.

Ms. Igau and EDF had to make numerous other changes at the construction site that also slowed work down. Crews of four or five workers could no longer pile into a pickup truck to drive around a work site. Each worker would have to drive on their own. Some inspections that were typically done by teams of workers would now require a drone to reduce the need for people to be close to each other.

A big weekly meeting on Wednesdays that used to involve some 300 people standing shoulder-to-shoulder in a parking lot was scrapped. Instead, managers met with groups of 10 workers who were required to stay at least six feet apart. EDF also did away with daily 8 a.m. meetings in a manager’s trailer. Everybody was required to wear masks, in addition to gloves. And EDF started conducting regular temperature checks.

Just as the work crews were adjusting to those changes, EDF confronted yet another challenge: heavy rain that made it difficult for delivery crews and construction workers to move around.

“If you’re trying to receive components, you really have to have tiptop roads,” Ms. Igau said. “We had messy conditions and we had a number of people out.”

In the first week of April, EDF received word from the cylinder maker, which is based in Mexico, that a logistics manager had died from the coronavirus.

“That whole team was quarantined for two weeks,” Ms. Igau said, adding that for a time she couldn’t even get the contractor to confirm when “they would be able to return to work.”

She spent days looking for other suppliers and worrying that the setback would mean that the project would not be done by the end of the year. But few companies make the cylinders, which have to be strong enough to hold up heavy turbines and withstand stiff winds. There was little spare capacity available, and even had she found another factory, there was no guarantee she would have been able to arrange for transportation because the shipping routes had been disrupted by the pandemic, too.

“How will we finish by the end of the year?” Ms. Igau recalls asking herself. Another concern: What should she do with construction workers if there were no towers for them to erect?

Even once the cylinder factory was up and running again, new problems cropped up. The cylinders had been scheduled to be sent by rail. But the delay meant there was no space on a train heading in the right direction, so they would now have to be sent by truck.

The cylinders, which are generally as tall as a five-story building, require a special class of truck that can only be operated by drivers with special training and permits. The drivers are typically older than 50, which makes them more vulnerable to the coronavirus. In addition, most drivers and their trailers were already busy ferrying other massive cargo.

But it wasn’t just the cylinders that Ms. Igau had to worry about. She was also having trouble securing blades for her turbines.

Supplies of balsa wood, a major component of wind turbine blades, became scarce this spring because about 95 percent of it comes from Ecuador, which was overwhelmed by the pandemic. At one point, so many people were dying there that bodies wrapped in plastic bags lay in the streets.

With just over two months left in the year, the first five turbines started spinning last week, giving EDF some hope that it will meet its deadline. But the number of coronavirus cases are on the rise across the country, and flu season is beginning, leaving executives uncertain.

“Every day something could happen on site that means our entire team could go into quarantine,” Ms. Igau said. “I don’t know how we will finish by the end of the of the year.”