BA boss: Firing and rehiring staff ‘off the table’

British Airways’ plan to get rid of cabin crew and then rehire them on inferior terms is now “off the table”, boss Alex Cruz has said.

Unions and MPs had accused the airline of following a “fire and rehire” policy, which saw some employees facing pay cuts of up to 50%.

Speaking to MPs on the Transport Select Committee, Mr Cruz said “there will be no need to issue new contracts”.

BA reached the outline of a jobs agreement with union Unite last week.

The pair have been in a bitter dispute over BA’s plans to shed up to 13,000 jobs and cut pay due to a collapse in demand for air travel in the pandemic.

Mr Cruz said it was a matter of “regret” that it took 73 days for BA’s non-pilot unions to sit down and negotiate.

But Labour MP Sam Tarry responded: “I would argue that if you hadn’t put a metaphorical gun to their head then that might not have happened.” 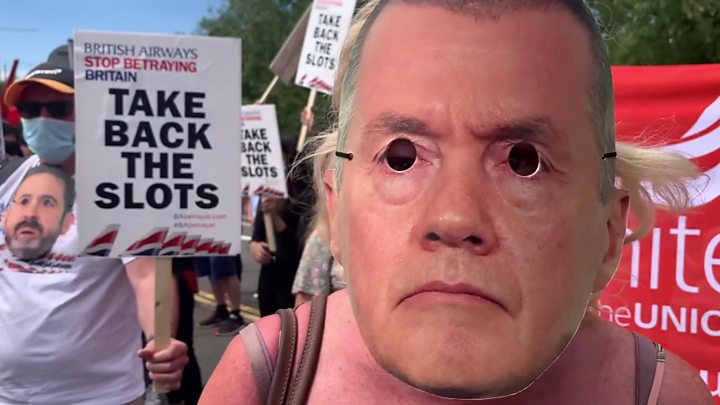 Mr Cruz said the airline would now follow the “standard methodology” of union agreements and make amendments to existing the contracts.

Details are still being worked out and ballots of some staff are yet to be held.

Long-serving cabin crew members face a 15% pay reduction, while hoping to retain many of the allowances which constitute a significant part of their overall pay.

“We have reached agreements in a majority of areas”, Mr Cruz said.

“We very much hope that the result of the ballots will be to accept those ballots.”

In relation to whether or not BA will have to make 13,000 staff redundant, Mr Cruz said that the company didn’t “need to get to that number”.

However, a large number of long-serving cabin crew have taken voluntary redundancy and many staff felt that the terms being offered at the time meant that was their only choice.

Mr Cruz told MPs that the pandemic had “devastated our business… and we’re still fighting for our own survival”.

“Everyone is facing decisions we never wanted to face,” Mr Cruz said,

But he refused to comment on an £833,000 bonus paid to the outgoing boss of BA’s parent company, Willie Walsh.

IAG faced a backlash from shareholders over that payment to Mr Walsh who left the company last week.

Next Generation Supply Chain Software Focuses on Ease of Use

‘One day everyone will use China’s digital currency’