We’re covering how Xi Jinping sees China’s tech future, why investors are betting on K-pop fans and whether reinfection is really something to worry about. 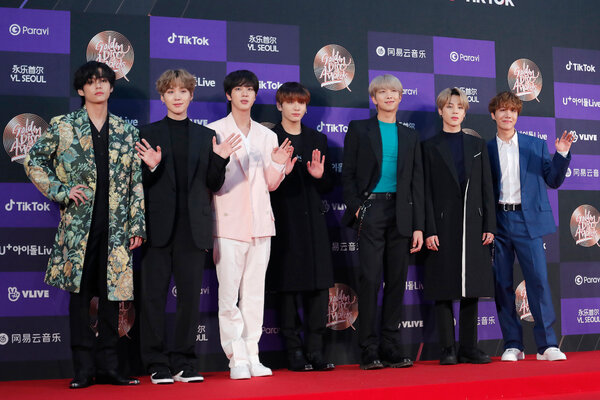 Shares in Big Hit Entertainment, the management company behind the K-pop group, begin trading in South Korea today. The country’s most hotly anticipated initial public offering since 2017 has investors scrambling, with hundreds of pre-orders for every share.

What investors are really paying for may not be BTS or its management company, but its ecosystem of followers. BTS fans are known as some of the most devoted in music. Beyond attending concerts, they enthusiastically perform services for the band that range from translating BTS content to running highly coordinated social media campaigns.

The fan base, which calls itself the Army, is diverse, cutting across lines of gender, age, religion and nationality. But investors remain concerned about the company’s dependence on BTS, as boy bands usually have short life spans.

Details: Big Hit reported a profit of $86 million last year, and is valued at around $4 billion, after raising more than $800 million by offering investors about 20 percent of the company. BTS was the world’s most lucrative touring act last year and, by one estimate, adds more than $3.5 billion annually to South Korea’s economy.

Bussa Krishna worshiped President Trump, praying to a life-size statue of the leader in his backyard every morning. When Mr. Trump tested positive for the coronavirus, Mr. Krishna, a farmer in his 30s, fell into a deep depression and began to starve himself.

On Sunday, Mr. Krishna died of cardiac arrest and his death made news across India. (There is no evidence linking his death to the fasting.)

Many Indians in major cities dislike Mr. Trump, but he enjoys broad support. A survey in February found that 56 percent believed that Mr. Trump would “do the right thing when it comes to world affairs.” Many see Mr. Trump’s “America First” stance as mirroring how Prime Minister Narendra Modi projects himself to his own supporters.

In other virus developments:

Rapidly growing caseloads in Europe and the U.S. are raising fears of another surge as winter approaches. There are outbreaks in 36 American states, pushing the country’s case curve to its highest level since August.

Forty-four infections have been linked to a single spin studio in Hamilton, Ontario, that Canadian officials said appeared to be complying with regulations. Health officials said the event renews questions about the safety of group workout classes.

President Emmanuel Macron announced that, starting on Saturday, the French authorities would impose a curfew between 9 p.m. and 6 a.m. in Paris and eight other cities, for at least four weeks.

Three Covid-19 trials have been paused for safety. Our reporter explains why that’s a good thing.

Mr. Xi delivered this message on Wednesday in the southern city of Shenzhen. It was symbolic: Since its designation in 1980 as a “special economic zone,” Shenzhen has been the incubator for reform and opening up. Now Mr. Xi hopes that Shenzhen can be an important high-tech hub and that he can shift the balance by taking Chinese tech, investment and power out into the world.

Mr. Xi said China would still welcome foreign investment, but he also said its citizens needed to prepare for an increase in global tensions. “The world has entered a period of turbulence and transformation,” he said.

Quotable: “A lot is riding on this for Shenzhen to be able to set an example for other cities in China,” said a professor at the University of Hong Kong. “Shenzhen’s importance to the national psyche is far greater than just its economic importance.”

If you have 6 minutes, this is worth it

A ‘war’ over water

Farmers in Mexico armed with sticks, rocks and homemade shields ambushed soldiers and seized La Boquilla Dam, above, to stop water payments to the United States. The farmers said the Mexican government was sending water — their water — to Texas, leaving them next to nothing for their crops.

Our reporter looked at the standoff pitting Mexican farmers against their country’s president and the global superpower next door. The fight illustrates growing conflict over increasingly scarce resources as a result of rising temperatures and long droughts, which have been caused by climate change.

India harassment: A new study by Human Rights Watch has found that poor Indian women who work in the informal jobs sector are routinely subjected to sexual harassment and abuse despite a groundbreaking law. Ninety-five percent of Indian women are employed in the so-called informal work sector.

Ikea idea: The Swedish furniture retailer started a global campaign to buy back used furniture as part of its efforts to combat climate change and discourage excessive consumption.

Indonesian ex-general: Prabowo Subianto has been a pariah in international affairs for decades, barred from the U.S. by the Bush and Obama administrations over claims of human rights violations. Now he’s meeting with top Pentagon officials as the U.S. seeks allies against China.

Snapshot: Above, protesters in Bangkok on Wednesday as the royal motorcade rolled by. After months of protests demanding reform to the military and the monarchy, it was the first time that members of the Thai royal family saw the frustration up close. Their three-finger salute, from “Hunger Games,” has become a symbol of the movement.

What we’re reading: This Vice article on the growing appeal of desserts that are not too sweet. “I’m hoping this is the future,” writes Carole Landry of the Briefings team. “Let’s oppose the sugar bombs.”

Cook: James Beard’s onion sandwich is fresh and unfussy. Rolling the edge of the sandwich in chopped parsley gives it a retro styling touch, but it’s crucial for flavor, too.

Watch: The Netflix documentary “Blackpink: Light Up the Sky” is a brief but endearing introduction to the idolized K-pop girl group.

Do: Dancing may help prevent falls in people over 65, researchers say. And the more older people danced, the better.

Let us help you do away with boredom with our At Home collection of ideas on what to read, cook, watch, and do while staying safe at home.

A recent case study about a 25-year-old man in the U.S. who contracted the coronavirus for a second time has led to concerns about repeat bouts of illness. But these cases are very, very rare. Here’s what you need to know.

Coronavirus reinfection is unusual. Since the first confirmed case of reinfection was reported in Hong Kong on Aug. 24, there have been three published case studies and reports of another 20 await scientific review.

This variability is entirely expected, and it has been observed in patients with diseases like measles and malaria, experts said.

A resurgence of symptoms doesn’t prove reinfection. For every confirmed case of reinfection, there are dozens of anecdotal reports of infected people who were sick and seemingly recovered but then became ill again weeks to months later. Usually there are crucial data missing in those cases, like a confirmed lab diagnosis, or a virus sample that can be sequenced. A vast majority of these cases are unlikely to be true infections. More likely, these are people experiencing a resurgence of symptoms connected to the original infection.

That’s it for this briefing. See you next time.

P.S.
• We’re listening to “The Daily.” Our latest episode is about the confirmation hearing of Judge Amy Coney Barrett.
• Here’s our Mini Crossword, and a clue: Drops on the ground? (three letters). You can find all our puzzles here.
• Our executive editor Dean Baquet released a note in support of The Times Magazine’s 1619 Project.

Blackstone to buy Simply Self Storage from Canada's Brookfield for $1.2 billion